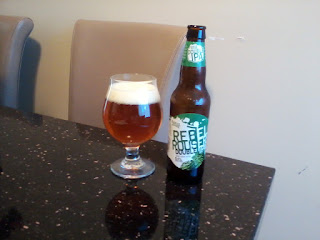 The next beer I will be reviewing is from Samuel Adam's core lineup of beers. They produce many IPA's under the Rebel series, (Click here for my Review of Rebel Juiced IPA) and this is one of their two Double IPA's. A double IPA is similar to a single IPA. However, more hops are added to add bitterness. In order too balance it out, more malt is added as well, which then translates to more alcohol. Rebel Rouser IPA clocks in at 8.4% ABV.

Samuel Adams has updated their packaging and the lower left picture is their current label. However, the picture that I have with the beer in the glass (upper right corner) is of their old packaging.

The beer appears amber red in color, with a big fluffy white head, nice retention, and leaves lacing along the side of the glass. It smells exactly like you would want a big double IPA to, with a big citrus-y aroma, along with pine notes, behind a big malty background. The beer hits the tongue with toasted caramel malt, has a nice and fruity linger, which is followed by a walloping hop finish that is just beautiful, with notes of citrus & pine.

The beer has a medium-bodied feel, feels great on the tongue, and has the perfect amount of carbonation. Overall this a great brew, it's well balanced and delivers the hops quite wonderfully.

*Rebel Rouser IPA is under the supervision of the Star-K*

Do you want more Kosher Craft Beer news & updates? Check me out on Twitter @Koshercraftbeer
Posted by Avrahom Pressburger at 9:22 AM