Pumpkin beers are a classic fall beer, that almost every brewery produces a version of. As pumpkin beers are obviously flavored, there are only a select few us kosher consumers can drink. Sam Adams has produced a few different pumpkin beers over the years, with this year's version called 20 Pounds of Pumpkin, due to the almost twenty pounds of pumpkin in each barrel. 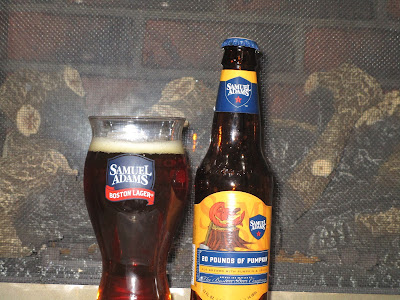 20 Pounds of Pumpkin pours a dark amber with an off-white head, that just sits on the beer for awhile, before slowly receding. It has a creamy pumpkin pie aroma, along with nutmeg as well. The taste is rich creamy pumpkin along with caramel toffee, that goes down in a spicy finish, with hints of cinnamon, cloves and nutmeg. The beer is medium bodied, with a nice creamy feel to it. Overall a 20 Pounds of Pumpkin is a well balanced beer, where the sweetness is counteracted by the spices nicely.

Posted by Avrahom Pressburger at 9:11 AM