With Winter just around the corner, the Boston Beer Company has released their new seasonal variety pack. The 2017 version is called Winter Classics, and has four old classics and two new beers. 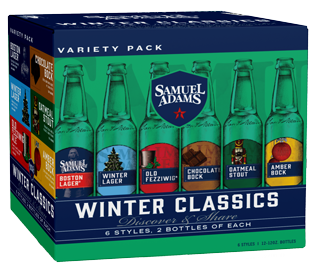 Before we get to the beers, a little heads up about the Kashrus info. Although three of the beers do appear on the current LOC, the Star-K has yet to update their LOC and therefore, I am going to go by the labels as I have done in the past.

The following was copied and pasted from an email received from the Star-K. (some grammatical changes were made)
* Chocolate Bock has lactose. It is a milk sugar and is added cold. Lactose is derived from whey when it is split into whey protein concentrate and lactose.  It has a hechsher. We consider it dairy.*
In conclusion it seems that 5 out of the 6 beers are Star-K Certified Parve, with the last one Star-K certified Dairy.

Posted by Avrahom Pressburger at 2:34 PM