Shmaltz Brewing He'brew Vertical Jewbelation is one special beer. It was brewed with all the Jewbelation recipes up until that point, and then barrel-aged in Sazerac Rye Whiskey Barrels. It was released in the year 2010 (before I was of beer purchasing age). I was lucky to come across this unique brew upon my visit to their brewery in Clifton Park, NY. I opened it over Shabbos, hence the bottle by itself with no beer by it's side. 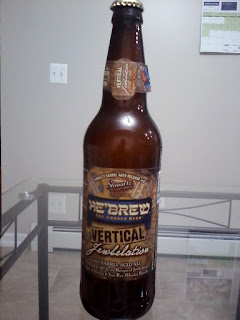 Vertical  Jewbelation pours a dark black with thin tan head, that quickly dissipates. The first aroma is all barrel-aged....vanilla and oak, followed by the more subtle aromas of mocha and chocolate fudge. The taste is rich dark malt that is laced with coffee, and chocolate fudge, that is beautifully enhanced by the whiskey from the barrel-aging. It has full-bodied feel,  slightly carbonated, a nice creaminess, and very drinkable for 10.5% ABV.Overall a great beer that stood the test of time, not oxidized at all, and drank just wonderfully.

*Shmaltz Vertical Jewbelation is under the supervision of the KSA*

Posted by Avrahom Pressburger at 1:48 PM